We have had the gamut of wacky weather this year.  I am posting this from home during the day as we are experiencing our first unofficial "Snow Day"............ in OCTOBER!  The snow this weekend was so heavy and the poor trees that have not lost their leaves were no match for it.  Limbs and trees are down all over the place causing power outages all over, including our schools.  Yes, there is still a fair amount of the white stuff, but it's a brisky 43 degrees out and will be getting a tad warmer as the week goes on.  Unfortunately, the nights are dropping to the freezing mark and below so the roads will be hazardous.
This was a picture of the backyard yesterday afternoon.  There is a branch down just past the steps to the left.  Our pin oak that is behind where we park our cars has numerous broken limbs that are not completely snapped off or are resting on others which makes it a pretty precarious situation.  We'll be parking the vehicles elsewhere for a while! 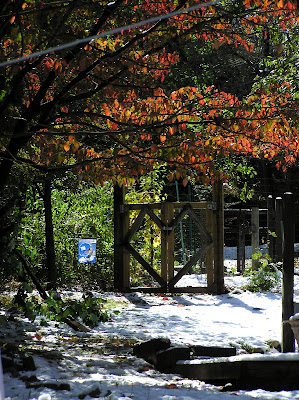 We had been at the condo during the storm and were witness to the tidal flooding and a bay that was wild with wind and waves but no snow.   Needless to say, we were tuned to the weather channel - that and the football game - in the company of our friends who helped make a dreary day go quickly.  We ventured out into the storm to meet another couple for dinner, but by that time the worst had passed.
Last weekend we had taken our bikes to one of the local county parks to try out the bike trail there.  It was a pleasant ride although a little cool for my ears.   Here's what the falls near the confluence of the North and South Branch Rivers looked like........ 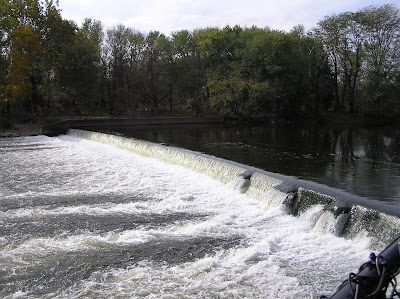 They are very small, not bigger than a quarter.  I have never seen shells like this near a river although I am told by our school custodian that there are also freshwater mussels that raccoons go nuts over that have the typical black shells.

So looking ahead I'm kind of wondering what kind of winter Mother Nature has in store for us!
Posted by Lorraine at 2:10 PM