One thing I think I've finally learned is if you get behind, do the prompts that you have ideas for so you don't get into a stall which is where I was mid-week again.  It also helps to take the list as it's published on the Friday before and really start brainstorming ahead of time.  I mean, like writing it down, not just thinking about it.  I've taken to making my list on another index card that I also use to clean my aquapainter on, and try my pen points and colors before putting them to paper.  Kind of like the paper on my craft table (I've not been using my craft room for these.  They've all been done either on my dining room table at home or our table at the condo.)  So shall we proceed......

Day 43 - Definition
I'm sure it could have meant definition in the sense of well-defined drawing, however I took it literally and shared a definition.  Do you see things in clouds sometimes?  Then you have experienced pareidolia also.  I used a white crayon as a resist for my "clouds" and washed watercolors over them for the sky.  They still needed more definition so I add white watercolor to the letters.  The definition was added in Micron marker. 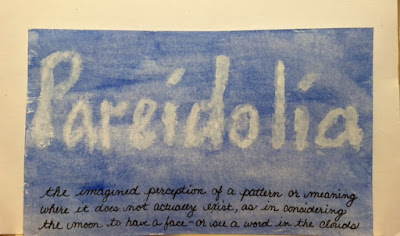 Day 44 - Focus or Blur
As seen through a pair of watercolored binoculars. Derwent Inktense Pencils. 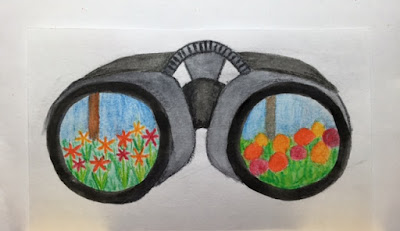 Day 45 - Saturday Night Live
I really haven't watch this often, but I do know that it comes on at 11:30 Saturday nigh on the peacock network. Fantasia watercolor pencils, Micron marker, silver fine tip marker. 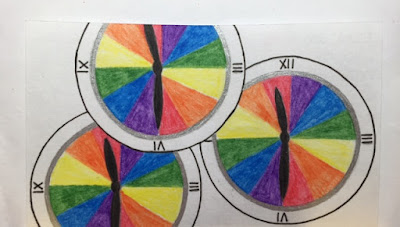 Day 46 - Album Cover
This would not be a record album.  This would be the cover of an album of all the stories that have been told and retold over the years by our Table 7 group.  Reliving our youth in verbal way.  Entitled "Exactly About" meaning that's exactly about what happened.  Like the night the guys were camping in the pine barrens and along came a girl in a white nightgown out of nowhere.  There was a guy following at distance behind her with a baseball bat hitting each tree as they traveled through the woods and came upon the campsite.  Their car was stuck in the sand and they needed help getting out.  Not being there, I can only picture an ethereal woman in white in the woods.  And not that we would be camping anytime soon, but if there was a woman in a white nightgown coming at us with a man following her with a baseball bat these days, I don't think I'd be sticking around to find out why. 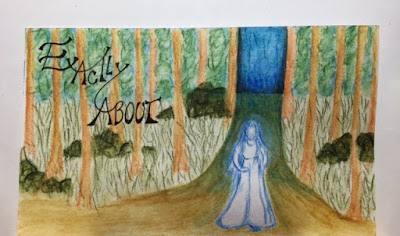 Day 47 - Fashion
I was going to do fabric swatches and got really lazy and decided to create my own "fabric" with Prismacolor pencils.  Imagine those orange ovals to be French knots, or seed beads amongst random blue stitching. 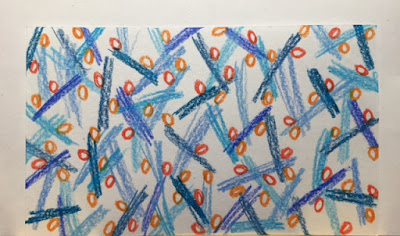 48 - Disco
A sad, sad attempt to show the sparkle up close of a disco ball.  Used silver and gold fine-tip markers. 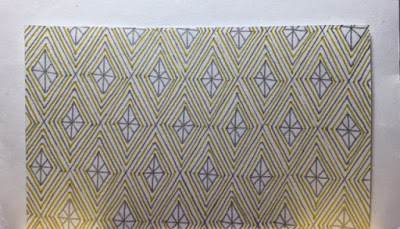 Held at an angle it does reflect light, but not anywhere near like a real disco ball. 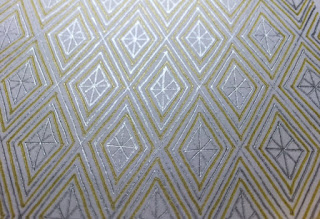 Day 49 - Black and White
On my list of ideas was a zebra - this is not a zebra.  But you didn't need me to tell you that I'm sure.   Micron marker and white gel pen. 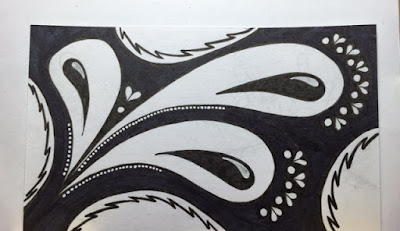 Today's photo challenge prompt is CREATE and I need to go do that now as we are having a Christmas in July party this weekend with the theme "Merry Fishmas!" and I promised cookies would be on the menu.  Trying some new recipes well before the holidays to see if they are worth doing then.  And there will be decorations and fishing and, well, I can't tell you everything now because there may be peekers. 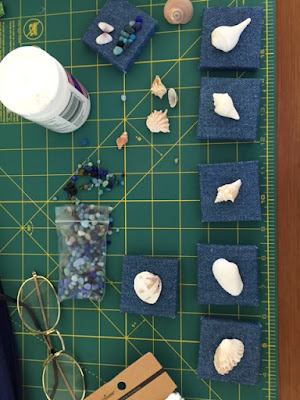