This week Sheri (aka Ksnurse) is our hostess and she has not only brought us an adorable teapot but a story about some escaped flamingos that is really true.  Please check out the Teapot Post for this week to get the whole story.  It seems one of the runaway, or should I say flyaway flamingos has found a new friend to hang with. 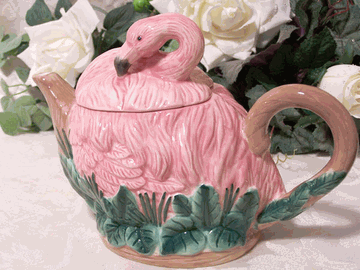 These punched flamingos were inspired by Ellen Kemper who does a lot of punch magic.  (Click on that link - you know you want to see what I'm talking about!)  She made these awesome flamingos out of the two-step bird punch. 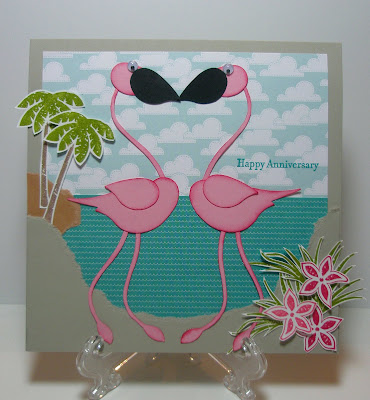 I turned this into an anniversary card.  HWNSNBP and I just celebrated the 37th anniversary of our first date.  Flip that number and it'll tell you the year ('73).  I'm usually not one much for figures but here is something I find interesting.  In 1973 I was 18 years old, a senior in high school and Friday, June 1st was our senior knock-off day.  I cut school to go down the shore with friends, came back early and HWNSNBP and I had our first date - we went to the movies to see 2001:  A Space Odyssey (the most boring film I've ever seen BTW).  Years later, after many more dates, HWNSNBP and I had two children, the second of whom is a daughter.  She was a senior in high school in 2001 when she was 18 years old.  On Friday, June 1st of that year it was also her senior knock off day and I do believe that she too, cut school and went down the shore with her friends.
Oh, and about the flamingos - there was a flamingo that used to show up unexpectedly in the yards of a group of friends some years back.  He watched our mailbox for a spell, and found residence in the yard of some Disneyworld vacationer's and then we lost track of it.  I think he might be paired up with Sheri's other lost flamingo.  Thank goodness they have each other!
The card base is Sahara Sand and the dsp is from the SAB prints pack.  The palm trees, flowers, and greens were stamped using the Tropical Party stamp set.  The sentiment comes from Teeny Tiny Wishes.  Okay, now I'm off to visit the Teapot Gallery.
Posted by Lorraine at 6:48 PM